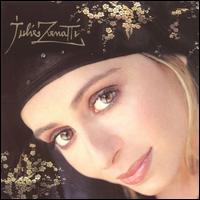 French singer Julie Zenatti was born in Paris in 1981. Eager to become a singer since her early teenage years, she took every step to finally be spotted by Luc Plamondon, who offered her a role in his massively successful musical Notre Dame de Paris. Between 2000 and 2007, keeping a somehow low profile (compared to other more exposed singers, and in spite of her five years-long relationship with singer Patrick Fiori), and helped by numerous hit singles (Si je m'en sors, Le couloir de la vie, Couvre-moi, Je voudrais que tu me consoles, Douce), she reached half a million record sales, making her a valuable artists for major record labels. ~ Olivier Duboc, Rovi