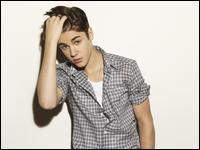 Pop singer Justin Bieber was barely into his teens when he released his platinum-selling debut, My World, and became one of 2009's youngest success stories. An Ontario native, Bieber had placed second in a local singing competition two years prior and began posting his performances on YouTube. The videos caught the attention of Scooter Braun, a talent agent and former So So Def marketing executive, who helped Bieber land an impromptu audition with the R&B star Usher. Impressed by what he saw, Usher -- along with Island/Def Jam chairman L.A. Reid -- quickly signed the 15-year-old Bieber to a recording contract.

Bieber released his first single, "One Time," in May 2009. Supported by a popular video that featured an appearance by Usher, "One Time" went platinum in both Canada and America, a feat that was replicated later that year with the release of My World. The disc was technically an EP, featuring only seven songs, but it reached number six on the Billboard 200 album chart and sold over a million copies. Less than a year after his debut, Bieber returned with the "second half" of My World, a ten-song release titled My World 2.0. Further demonstrating his and his management's marketing power, over 8,000 fans who pre-ordered My World 2.0 had their head shots used in a photo mosaic (formed to look like a portrait of Bieber) that was displayed on the back side of the disc's booklet. The release topped the Billboard 200. A few weeks later, a combination of My World and My World 2.0, titled My Worlds, appeared in some territories.

By the end of 2010, Bieber issued My Worlds Acoustic, a set featuring acoustic versions of nine songs off the My World discs, as well as one new song. The following February, the 3-D documentary Never Say Never was released to theaters. The seven-track Never Say Never: The Remixes, released just days after the film, maintained the flow of Bieber product, and featured appearances from the likes of Kanye West, Usher, and Miley Cyrus. Just in time for Christmas 2011 came the holiday-themed Under the Mistletoe, complete with several celebrity guest duets and an original song, "Mistletoe," for the first single, which entered the Holiday Songs chart at number two. In 2012, Bieber returned with his sophomore studio effort, Believe. Featuring the single "Boyfriend," the album also included guest appearances from Ludacris, Nicki Minaj, Drake, and others. It became his fourth number one album. Believe Acoustic, a sequel to My Worlds Acoustic, followed in 2013. ~ Matt Collar & Andy Kellman, Rovi