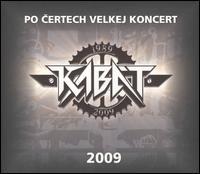 A Czech rock band that formed in 1983, Teplice's Kabat (the Coat) would spend the first few years of their existence working out their membership, before releasing the debut platter Má Ji Motorovou (She Has It Engine Driven) in 1991. Core members Milan Spalek (bass) and Tomas Krulich (guitars) roped in vocalist Josef Vojtek and drummer Radek Hurcik before solidifying the long-running roster in 1990 with the last-minute addition of second guitarist Ota Vana. With the band's debut and subsequent live album roping in new fans left and right, Kabat soon scored a deal with Monitor/EMI. The band went on to release a string of hit albums, starting with Devky Ty To Znaj in 1993. Their 1994 follow-up, Colorado, would become their best-selling collection of new material -- only to be bested in sales by the 2002 tenth anniversary compilation Suma Sumárum. The aforementioned compilation, which coincided with a concert tour of the same name, solidified Kabat's reputation as a Czech hard rock giant, and their next collection of original work, 2003's Dole v Dole, was almost as big a seller as Colorado. The album would also bring Kabat three nominations in their country's version of the Grammy Awards, including nods for Group of the Year and Rock Album of the Year. The band released its next album, Corrida, in 2006, which would be yet another huge seller, peaking well within the Top Ten. In 2007, Kabat reached the semifinals of the Eurovision Song Contest, representing the Czech Republic in that nation's first appearance in the contest. ~ Chris True, Rovi