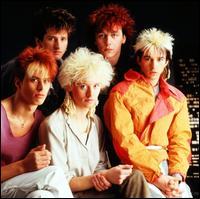 Kajagoogoo's light synth pop and pretty, photogenic look made the group an instant sensation in the early days of MTV. Led by vocalist Limahl (born Chris Hamill), the group also featured Steve Askew (guitar), Nick Beggs (vocals, bass), and Stuart Crawford (vocals, synthesizer). Produced by Duran Duran's Nick Rhodes, Kajagoogoo's debut single "Too Shy" hit number one in the U.K. in early 1983; it peaked at number five in the U.S. "Too Shy" and the following album White Feathers proved the band may have shared some similarities with Duran Duran and Naked Eyes -- they were pretty and played immediately accessible, polished pop -- yet Kajagoogoo was essentially a synth pop variation of a bubblegum group. Like a bubblegum group, they were destined to have only one big hit; "Ooh to Be Ah" and "Hang on Now" both were Top 15 U.K. hits, yet neither made an impact in the U.S. At the end of the 1983, Limahl left for a solo career. Kajagoogoo continued with Nick Beggs as the lead vocalist, releasing Islands in 1984; it disappeared from the charts quickly. Meanwhile, Limahl scored a hit with the theme song from The Neverending Story. Perhaps in an attempt to gain some credibility, the group shortened their name to Kaja and released Crazy People's Right to Speak. It was a sales disaster and the band broke up the following year. Limahl continued to record, albeit without much chart success; eventually, his records were not released in either the U.S. or the U.K. -- his last album, 1992's Love Is Blind, was only released in Germany. ~ Stephen Thomas Erlewine, Rovi