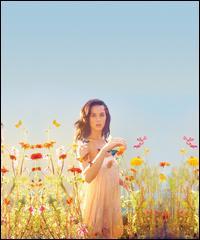 A former Christian artist, Katy Perry rebranded herself as a larger-than-life pop star and rose to prominence during the summer of 2008. Before she topped the charts with songs like "I Kissed a Girl" and "California Gurls," though, she spent the better part of a decade recording music under a different name. Katheryn Elizabeth Hudson (or Katy Hudson, as she billed herself on her 2001 gospel album) was born on October 25, 1984, in Santa Barbara, California. Raised in a religious household as the daughter of two pastors, she was forbidden to listen to secular bands as a child, although a childhood slumber party introduced her to the music of Alanis Morissette and Freddie Mercury. Religious music remained at the forefront, however, and Katy released a self-titled Christian album in 2001 under her original name. She would later abandon the genre (and her given surname) in favor of a pop career.

At age 17, she began working with hitmaker Glen Ballard, who had produced and co-written for Alanis Morissette. Several years later, she teamed up with the Matrix, a Grammy-nominated production/songwriting team whose résumé included collaborations with Avril Lavigne, Shakira, and Korn. Tired of producing music for other artists, the Matrix had plans to record an album of their own, with Perry serving as one of the group's two singers. The project was ultimately shelved, but not before Perry appeared in a 2004 write-up by Blender magazine, who hailed her as "the Next Big Thing!"

With the Matrix's unreleased album sitting in the vaults at Sony Records, Perry went back to the drawing board and began working on a solo album for Columbia. The project was eventually canceled, although two of its songs were later given to Kelly Clarkson, who scored a Top 40 hit with "I Do Not Hook Up" several years later. Perry (who, by this point, had shed her original surname due to its similarity to actress Kate Hudson) then signed with Capitol, who encouraged their new client to write her own music and helped establish her image as a boisterous, tongue-in-cheek pop star. Perry's debut single, "Ur So Gay," generated a small buzz with its mischievous lyrics and clever music video, but it was "I Kissed a Girl" that proved to be her breakthrough hit, topping the charts in 20 countries and pushing its accompanying album, 2008's One of the Boys, into the Top Ten in America. Perry supported her debut by joining the Warped Tour that summer, where she toured alongside her boyfriend at the time, Travis McCoy of Gym Class Heroes. Meanwhile, "Hot N Cold" became her second multi-platinum hit, "Thinking of You" (one of the album's three songs written solely by Perry) cracked the Top 40, and "Waking Up in Vegas" cracked the Top Ten.

Such success meant that Katy Perry had officially become one of the industry's biggest pop stars, celebrated as much for her outsized behavior and outrageous fashion choices as the music itself. She continued touring through the summer of 2009 (albeit without McCoy, whose boyfriend status had been revoked earlier that year) and found time to tape an installment of MTV Unplugged, which was released in November. Meanwhile, she worked on a new album and started up a whirlwind romance with comedian Russell Brand, eventually becoming his wife, a short-lived marriage that would last for only a year. She would later begin an on-again, off-again relationship with adult-alternative singer/songwriter John Mayer. Recording sessions for her album wrapped up in early 2010, and Perry scored her second number one single with "California Gurls," which was released that May. The accompanying album, Teenage Dream, followed in August. The album was reissued in 2012 as Teenage Dream: The Complete Confection, with the bonus track "Wide Awake," earning Perry a Grammy nomination for Best Pop Solo Performance.

In 2013, Perry announced the release of Prism, her fourth album, with the number one single "Roar." Written and produced in collaboration with a host of artists and producers (including Sia, Diplo, Max Martin, Bloodshy, and Emeli Sandé), it was inspired musically by Robyn, Britney Spears, Mariah Carey, and Prince, and lyrically by her past relationships. Appearing in October, it hit number one in the U.S. and U.K., followed by another Billboard chart-topper, "Dark Horse," featuring Juicy J. ~ Andrew Leahey, Rovi