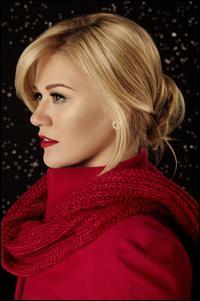 The winner of Fox TV's first American Idol competition during the summer of 2002, Kelly Clarkson went from an anonymous talent to a nationally known singer in a matter of months, performing for an audience of millions. One of the show's most naturally gifted singers, the affable Texan then went on to enjoy a successful pop career, with only Carrie Underwood rivaling her as American Idol''s most commercial export.

Clarkson was born in Fort Worth and raised in Burleson, Texas, and her vocal talents were discovered in seventh grade, when a music teacher heard her voice and urged Clarkson to join the school choir. After high school, she opted to skip college and went to Hollywood to make her name; she appeared as an extra on an episode of Sabrina, The Teenage Witch, but no other opportunities materialized. Upon returning to Burleson, Clarkson worked at a movie theater, promoted Red Bull energy drinks, and ultimately worked as a cocktail waitress at a comedy club before entering the American Idol contest.

One of 10,000 aspiring singers, Clarkson distinguished herself not only with her big, surprisingly mature voice, but also with her down-to-earth charm and sense of humor; at one of her auditions, she switched places with judge Randy Jackson, who did an impromptu version of R. Kelly's "I Believe I Can Fly." Over the course of the 13-week show, her consistently strong performances of songs like "Respect," "Natural Woman," "Stuff Like That There," and "Without You" earned Clarkson enough audience votes to claim one of the contest's two finalist positions. After singing "A Moment Like This" and "Before Your Love," both of which were written for the show, Clarkson won the American Idol contest with 58-percent of the audience's votes. In addition to the show's prize of one million dollars and a recording contract with RCA, Clarkson secured a deal with Creative Artists Agency and several bookings, including the national American Idol tour and a performance of the national anthem at the September 11 commemoration at Washington, D.C.'s Lincoln Memorial.

Despite her newfound fame, Clarkson opted to remain in Texas rather than move to New York or Los Angeles. Her first single, "A Moment Like This," was released just two weeks after she won the contest and quickly earned platinum sales. Clarkson's debut full-length, Thankful, was released in spring of 2003, just in time to coincide with the second season of American Idol (and right before the American Idol movie, From Justin to Kelly). Breakaway followed in late 2004 and was a huge success, selling over five million copies (making it the third best-selling album of 2005) and spawning the hit singles "Because of You," "Behind These Hazel Eyes," and the enormously popular "Since U Been Gone." That song and Breakaway earned Grammys for Best Female Pop Vocal Performance and Best Pop Vocal Album, respectively, at the 48th Annual Grammy Awards in early 2006. Clarkson continued her busy touring schedule into the summer and announced plans for her third album.

Clarkson released My December, the studio follow-up to Breakaway, in 2007. Notable as Clarkson's first foray into songwriting, My December featured a darker, more rock-oriented edge than its predecessor and even featured a guest appearance by punk icon and bassist Mike Watt. However, label exec Clive Davis openly disapproved of the album's direction, claiming that it lacked the commercial appeal of Breakaway. A public feud ensued, and Clarkson was dealt another blow when poor ticket sales resulted in the cancellation of her upcoming tour. The leadoff single "Never Again" nevertheless became a Top Ten pop hit, and My December climbed its way to platinum status by the year's end.

Clarkson returned to the top of the charts in early 2009, when the sugary single "My Life Would Suck Without You" set a record for the largest leap to number one. Composed by songwriting vets Max Martin, Lukasz Gottwald, and Claude Kelly, the song also set the stage for her fourth album, All I Ever Wanted, whose pop-minded material was mostly produced by OneRepublic's Ryan Tedder. While touring in support of All I Ever Wanted, Clarkson announced that she had begun work on material for her follow-up. Eventually, she collaborated with a handful of writers and producers, including Claude Kelly and Howard Benson, as well as Jason Halbert, Rodney Jerkins, and others. In 2011 Clarkson released the resulting album, Stronger. Her fifth studio effort, the album featured the single "Mr. Know It All." A Greatest Hits package followed in 2012, and Clarkson's first holiday album, Wrapped in Red, was released in October of 2013. As well as the usual selection of festive favorites, it included a number of newly written songs, including several co-penned by Clarkson herself. ~ Heather Phares, Rovi