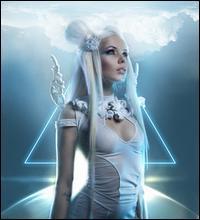 Estonian singer Kerli was born in Elva, a Soviet-occupied town with a population of 5,000, in 1987. As a teen, she dreamed of becoming a pop star and leaving her homeland, and studied singing, dancing, acting, and piano. In 2001, she was the runner-up in that year's Eurolaul, a televised competition that determines the song that will represent Estonia in the Eurovision Song Contest; two years later, she competed in Sweden's Melodifestivalen, but was eliminated in the second semifinal round. She continued to perform and write songs, ultimately scoring an audition with L.A. Reid, who signed her to Island Def Jam in 2006. Kerli worked with producer, songwriter, and mixer David Maurice on an autobiographical set of songs, the first batch of which were released on the digital EP Kerli in 2007. Her debut album, Love Is Dead, arrived in summer 2008. ~ Heather Phares, Rovi