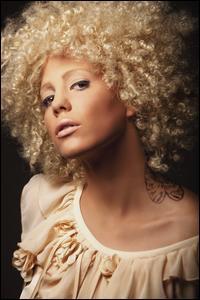 LaFee emerged as one of the brightest new stars in German pop at the age of just 16. Born Christina Klein on December 9, 1990, in Aachen, she first attracted national attention in 2004, appearing on the RTL television network amateur showcase Kiddy Contest. Producer Bob Arnz extended a record deal, and in early 2006 LaFee issued her debut single, "Virus," the first of four consecutive Top 40 singles including "Prinzesschen," "Was Ist Das?," and "Mitternacht." Her self-titled debut LP went on to top the German and Austrian charts, as did her second, 2007's Jetzt Erst Recht, which was released through EMI. In 2008, LaFee released Shut Up, her first English album. By her exceptionally high standards up to that point, the record was unsuccessful. Peaking outside the Top 20 in both Austria and Germany, Shut Up also failed to help her break into other European territories. Not letting this slow her down, LaFee bounced back with the high-selling Ring Frei and a greatest-hits album in 2009 before releasing Frei in 2011. ~ Jason Ankeny, Rovi