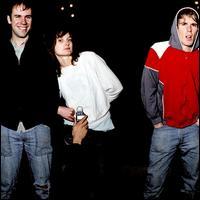 Land of Talk feature Elizabeth Powell (vocals/guitar), a former punk who got her start playing her own anti-folk anthems on the local scene of Guelph, Ontario, during her mid-teens. Upon her college years, with stints playing with the Aaron Riches Nuclear Family Band and the Valentines behind her, Powell set her sights on a solo career in the late '90s. While gigging in and around Ontario and Quebec, she met bassist Blake Markle and his friend, drummer Bucky Wheaton, with whom she formed Land of Talk in 2005. By the time recorded its 2006 debut album Applause Cheer Boo Hiss -- which bore influences such as PJ Harvey, Dinosaur Jr., and Sonic Youth -- Tim Kramer had taken over bass duties. More lineup changes followed in 2007, with Kramer and Wheaton leaving Land of Talk and bassist Chris McCarron and drummer Eric Thibodeau joining. The band landed on Saddle Creek for its second-full length, 2008's Some Are Lakes, which showed off a more eclectic, melodic approach and production by Bon Iver's Justin Vernon. For Land of Talk's 2010 album Cloak and Cipher, Powell -- who wrote the album's songs while recuperating from a problem with her vocal cords -- was joined by two new bandmates, bassist Joseph Yarmush and drummer Andrew Barr, as well as members of Stars, Arcade Fire and the Besnard Lakes. ~ MacKenzie Wilson, Rovi