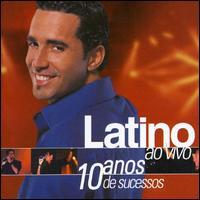 One of the successful composers/interpreters of the carioca funk movement, Latino's albums have had success, bringing him gold and platinum records. At age 12, he was taken by his mother and American stepfather to Rochester, NY. Two years later, he was already taken by the carioca dance craze. At 22, he came back to Brazil. Making acquaintances with members of the group You Can Dance, especially Kadu, he started to write songs with them. They were regulars at funk and charm dances in the working class suburbs of Rio. There, Latino began to be acknowledged as a good dancer and became a member of the group. Soon he created his own dance group, Young Dance. Introduced by members of You Can Dance to DJ Adriano and MC Guto (Bass Crew), he was invited to write a song for a compilation they were producing. Not only his "You Took My Love" but also his own interpretation of "Brought Me Love" were included on Bass Crew, Vol. 1. It generated some invitations for shows and an appearance in the Caravana do Amor show. In that period, Latino faced serious economic hardships but saved money to record a demo CD. When he had put together the necessary amount, he looked for DJ Marlboro, who convinced Latino to instead sign a contract with him. Marlboro also convinced Latino to sing in Portuguese and his first song in that language was "Vem Amor." Soon his song "Me Leva" was included in another compilation, Funk Melody. That one was successful, bringing several invitations for shows and reaching the radio top parade in Rio. Signing with Sony Music, Latino released his first solo CD, Marcas de Amor, which received gold and platinum records. His romantic funk style has earned him a big female fan club that follows him in his live performances. Latino has had variable success with his subsequent albums, including Latino en Español, dedicated to the Spanish-speaking countries. ~ Alvaro Neder, Rovi