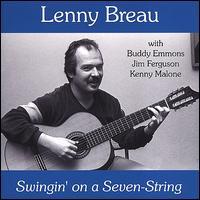 An outstanding jazz improviser who performed on both acoustic and electric guitars, Lenny Breau's right hand drew on classical, flamenco, and country (Travis/Atkins) finger-picking techniques. He was among the first guitarists to digest the impressionistic, post-bop chord voicings of pianist Bill Evans. Breau developed the ability to simultaneously comp chords and improvise single-string melodies, creating the illusion of two guitarists playing together. His facility with artificial harmonics remains the envy of many guitarists. Late in his career, Breau began using a seven-string guitar that extended the instrument's range in the upper register. Breau's early RCA recordings are eclectic and technically dazzling. His later work is less flashy, but communicates on a deeper level.

Born to Canadian country music singers, Lenny Breau started out playing country in a sophisticated manner. Chet Atkins himself helped Breau get an RCA recording contract in 1968. However, Breau's jazz-oriented style and remarkable technique quickly caused him to be uncategorizable. Problems with drugs made his career erratic and he is now considered an underground guitar legend. A new label (Guitararchives) was formed in 1995 specifically to release private tapes of his performances. ~ Richard Lieberson & Scott Yanow, Rovi