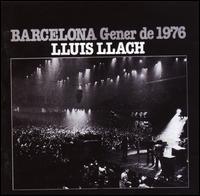 Catalan musician Lluís Llach was born May 7, 1948 in Girona. He spent all of his childhood in Verges, a small town of less than a thousand people where he lived with his parents and older brother. His father was a doctor, his mother a teacher who introduced his brother and him to music, playing piano and guitar throughout their childhood. The presence of a piano in the house filled Llach with inspiration, he began composing melodies as early as the age of six. At nine-years-old Llach left home for Figueres to attend school. Six years later he moved to Barcelona to study engineering, eventually choosing the field of economics instead. Llach immersed himself completely in the University experience, taking advantage of the musical opportunities the community presented. He made his performance debut in 1967 in Terrassa, only months later appearing at the Festival de la Canco de Barcelona where he took second place. Following his performance he was approached by execs at CBS Spain and offered a contract on the condition that he record only in Castilian, leaving his preferred Catalan behind. Llach elected instead to sign with the small Concentric, run by fellow Catalonians whose only object was to present and preserve their heritage and culture. His 1969 recording Les Seves Primeres Cancons sold an astonishing 100,000 units, setting the tone for what would become a meteoric career. At the same time his recording career began to take shape Llach began pursuing a career in acting. Both for his dramatic roles and enormous discography (boasting well over two dozen titles to his credit) Lluís Llach is one of the world's most visible Catalonian personalities. ~ Evan C. Gutierrez, Rovi