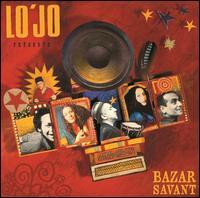 Lo'Jo are as much about an idea as the music they make. The band, founded in 1982 in the small French town of Angers by singer/keyboardist Denis Péan, they've been involved in multimedia shows, circuses, politics, and even hosted a festival in the Malian desert; not your basic group, by any means. Lo'Jo Triban -- to give them their full title -- had been in existence for a year when Richard Bourreau (violin/kora) joined and the music began to gel. For several years, with a rotating cast of members, they played events locally, working with dancers and film as part of their overall presentation. And by the end of the decade, they were playing throughout Europe and had even made a couple of trips to the U.S. with an artists' collective to appear in New York. Curiously, though, they didn't enter the studio to record until 1992, when they made Fils de Zamal, which appeared the following year along with G7 of Destruction & Artisans of Peace, a firm statement of political stance. Things really began to come together in 1995 with the addition of singer/saxophonist Yamina Nid El Mourid and her sister, Nadia, who brought a strong North African influence to the music. In 1996, the new lineup recorded "Sin Acabar" with sympathetic English producer Justin Adams, and 1997 saw them complete the Mojo Radio disc with Adams. Upon its release in 1998, they found plenty of open ears in the world music community, getting them on the WOMAD circuit, which introduced them to a global audience and they proved to be the hit of the first WOMADUSA. But far from content to rest on their laurels, they looked outside their own career to produce an album for Benin's Gangbe Brass Band, whom they'd met, and see it was released. In 1999, they also journeyed to Bamako, Mali, to begin work on their next disc, with Adams again producing. Boheme de Cristal appeared in 2000 (2001 U.S., followed by the belated domestic release of Mojo Radio in 2002), and the band once more undertook a U.S. tour. While in Mali, they'd come into contact with the nomadic Tuareg people in the form of the musical group Tinariwen, and they became involved in the organization of Festival of the Desert, held in the Sahara in Mali in January 2001. ~ Chris Nickson, Rovi