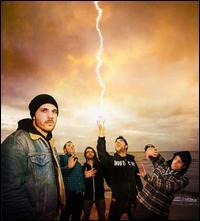 German post-rock/metal band Long Distance Calling was formed in Münster in 2006. The band emerged after a sequence of jam sessions involving a variety of musicians, and after their search for a vocalist failed, they decided to make primarily instrumental music. In the same year, the DMNSTRTN demo was created, drawing favorable reviews in the German press. Their first studio album, Satellite Bay, was released in 2007, featuring guest vocals from the Haunted vocalist Peter Dolving. The band released Avoid the Light in 2009, which was produced by Kurt Ebelhäuser from the band Blackmail. Two years later they released their self-titled album third album. It was their first to successfully enter the album charts in their homeland (at number 36), and was also chosen by Metal Hammer, among other music mags, for album of the year in the post-hardcore and rock/metal sections. The band continued on from this success, recording The Flood Inside in 2013, featuring vocalist Martin Fischer on selected of the tracks. ~ James Pearce, Rovi