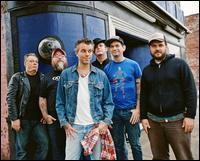 Adding a Southern flavor to their love of the indie folk-pop of Ida, Memphis alt-country rockers Lucero have suffered the turbulence that comes with the indie scene, but their story of perseverance and survival is triumphant, so much so that director Aaron Goldman made a film about it. Formed by leader Ben Nichols in the late '90s, Lucero took their name from the Spanish word meaning "bright star." After releasing a single on the Landmark label, Lucero -- rounded out by drummer Roy Berry, bassist John C. Stubblefield and guitarist Brian Venable -- signed with the alternative country label Madjack for their 2001 self-titled debut. Momentum started to build with their 2002 release, Tennessee. With critics picking up on their rock and Replacements edge, a decision was made to sign with the more diverse label Tiger Style. The 2003 release That Much Further West earned them positive reviews and a spot on Rolling Stone's Hot List. Things seemed to be going well, but as the album was catching indie fire, Tiger Style announced they were closing shop.

The band formed its own label, Liberty & Lament, through a deal with East West and worked on its next album with famed musician/producer Jim Dickinson. Released in spring of 2005, Nobody's Darlings featured the most Southern-fried sounds from the band yet. Mixing archival footage along with footage shot during the recording of the album, Goldman premiered his Lucero documentary Dreaming in America in September of 2005. A month later the film was released on DVD and CD/DVD featuring 13 rare live bonus tracks. The out of print effort The Attic Tapes (originally released prior to their 2001 Madjack debut) was reissued in April 2006 with bonus early demo and rare 7" tracks, which preceded the release of Lucero's next studio effort, September's Rebels, Rogues & Sworn Brothers. Supporting tour dates through the fall followed with openers Rocky Votolato and William Elliott Whitmore. The year 2009 saw the release of Nichols' solo EP The Last Pale Light in the West along with the band's album 1372 Overton Park. Lucero spent the remainder of the year on tour in support of the album.

Lucero remained busy touring during 2010 and 2011, though they didn't record, they played festivals ranging from the SXSW Music And Media Conference, Coachella, and the Van's Warped Tour. Nichols played some solo shows as well. Toward year's end, they re-entered the studio to begin work on Women & Work, their debut offering for ATO Records. Produced by Ted Hutt, and featuring a full horn section --as well as guest vocals from Amy LaVere -- the album was released in March of 2012 and followed by an American tour. ~ David Jeffries, Rovi