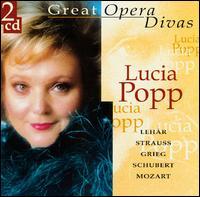 Popp was an accomplished coloratura soprano in the early years of her career, but later as her voice changed color slightly, she moved with great success into the lyric repertoire, and still later, into the lighter Strauss and Wagner operas. She had the ideal voice and personality for Viennese operetta, and was one of the best Rosalindes and Hanna Glawaris of her time. She was also a celebrated recitalist and lieder singer, and in both recitals and on the opera stage had a charming stage presence. Her untimely death in 1993 (the same year that saw the early deaths of Arleen Auger and Tatiana Troyanos) prematurely ended a major career.

When she was a child, while she sang in local choirs, her primary interest was acting, and after high school, not being certain of what she wanted for a career, she entered the Bratislava Academy to study drama. Anna Hrusovska-Prosenkova, a voice teacher at the Academy, happened to hear her singing during a performance of Le Bourgeois Gentilhomme, and offered her voice lessons. She began her studies as a mezzo, but as she described it, her voice suddenly developed a high upper register, and when she graduated she began her professional career as a soprano. In 1963 she made her stage debut at the Bratislava Opera as the Queen of the Night in Die Zauberflaute, and also debuted at the Vienna Theater an der Wien, which led to her being engaged by the Vienna State Opera, where her first role was Barbarina in Le Nozze di Figaro. She had strong ties to the Vienna State Opera during her career, though she left their regular roster in 1967, and in 1979, she was named an Austrian Kammersangerin. She made her Covent Garden debut in 1966 as Oscar in Un Ballo in Maschera, and her Met debut in 1967 as the Queen of the Night.

During the 1970s, she left coloratura roles for lyric ones, particularly Mozart, where she was an especially effective Pamina and Susanna, and in the 1980s, abandoning those roles, as well as Sophie in Der Rosenkavalier, another of her specialties, she began to add even heavier roles, including Eva in Die Meistersinger and Strauss' Arabella (both in 1983), with similar success. She died unexpectedly in 1993.

On Acanta (43 326), she recorded a number of arias from both her core Mozart and Czechoslovakian repertoire as well as from operas she sang far more rarely. Her recording of operetta arias on EMI (CDR 7243 5 69853 2 2) displays her silvery voice and charm to great advantage, and she is a vivid Susanna on the Solti "dream cast" for Le Nozze di Figaro on London (410 150-2). ~ Ann Feeney, Rovi