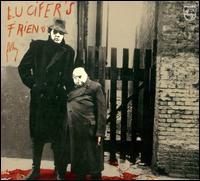 A German outfit fronted by a British singer, Lucifer's Friend first gained minor notoriety, and later major cult status, as both early practitioners of heavy metal and progressive rock. Formed in 1970 Hamburg, by former German Bonds members Peter Hesslein (guitar), Peter Hecht (keyboards), Dieter Horns (bass), and Joachim Rietenbach (drums), the group was initially dubbed Asterix and recorded an entire album's worth of material before connecting with singer John Lawton, whose then band, Stonewall, was playing a residency at the city's famed Top Ten Club. Lawton's vocals would grace Asterix's only, eponymous album later the same year, and all involved were excited enough by the results that they immediately began collaborating on more material with which to relaunch the band under the provocative new moniker of Lucifer's Friend. Released in early 1971, the Lucifer's Friend album contained organ-intensive hard rock along the same lines as contemporary proto-metal bands like Deep Purple, Atomic Rooster, and, especially, Uriah Heep, for whom, coincidentally, Lawton would wind up singing several years down the line. But, for now, Lucifer's Friend's biggest challenge was a problematic aversion to touring, as well as a compositional restlessness that saw their sophomore effort, 1972's curiously named Where the Groupies Killed the Blues, morphing drastically to acquire progressive rock tendencies reminiscent of King Crimson and, to a lesser degree, the quickly emerging Krautrock acts of the period. These compositional experiments would only intensify on 1973's I'm Just a Rock 'n' Roll Singer, which added entire brass sections in the vein of Chicago Transit Authority, and 1974's Banquet (featuring new drummer Herbert Bornhold), which soared upon even jazzier elements and symphonic arrangements delivered with help from the James Last Orchestra. Lucifer's Friend would finally reign in such extravagance on 1976's Mind Exploding LP (where Bornhold was demoted to percussionist behind new drummer Curt Cress), and they even considered increasing their touring engagements, but their only problem now was that Lawton had quit -- accepting the offer to join Uriah Heep that was mentioned earlier. Scotsman Mike Starrs (formerly singer for Colosseum II) was brought in to replace him and Lucifer's Friend proceeded to abruptly abandon their progressive past for good, embracing melodic mainstream rock on a pair of albums: 1978's Good Time Warrior and 1980's Sneak Me In (adding second keyboardist Adrian Askew). Then, John Lawton returned for a final, harder-rocking Lucifer's Friend album, 1981's Mean Machine, after which the group officially split up until 1994's one-off reunion LP, Sumo Grip. Interestingly, through all of these years and stylistic changes, it's ironically that original Lucifer's Friend album -- more so than their more abundant prog rock releases -- which has enjoyed the most frequent reissues, being considered a classic document of early heavy metal. ~ Eduardo Rivadavia, Rovi