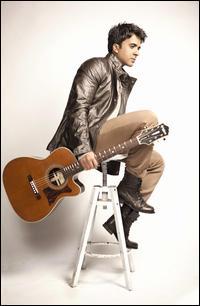 Initially molded as a traditional Latin balladeer, one who sings romantic songs with much dramatic flair over sweeping string arrangements, Luis Fonsi enjoyed much success as such, though he began to break steadily from that mold, beginning with Paso a Paso in 2005, and enjoyed even greater success and more critical acclaim as a result. Born in Puerto Rico and raised in Orlando, Florida, Fonsi dove into show business at a young age, singing in a school vocal group called the Big Guys that also included future *NSYNC star Joey Fatone. Following high school, Fonsi studied singing at Florida State University and scored a contract offer from Universal Latino. He debuted on Universal in 1998 with Comenzare, which did well, peaking at number 27 on Billboard's Top Latin Albums chart and spawning four hit singles: "Si Tu Quisieras," "Perdóname," "Dime Como," and "Me Iré." His follow-up album, Eterno, released in 2000, did even better, peaking at number six on the Top Latin Albums chart and spawning another four hit singles, among them the chart-topping "Imaginame Sin Ti." And so it went for the next few years, with more releases and more commercial success. Amor Secreto topped the Latin album chart in 2002 and Abrazar la Vida came close in 2003, both of them carried by numerous hits. The only mishap for Fonsi during this remarkable run was an English-language crossover attempt, Fight the Feeling, that came and went very quickly in 2002, a clear miscalculation.

When time came for Fonsi to record his sixth album, to be released in 2005, he went out on a limb, recruiting producer Sebastian Krys, who had previously worked with the likes of Carlos Vives, Obie Bermúdez, and JD Natasha. The resulting album, Paso a Paso, was still a Latin pop excursion through and through, but in general, it featured guitars in the forefront rather than sweeping strings. It also explored different kinds of rhythms and arrangements, resulting in Fonsi's most distinct and creative album to date. Critics, who hadn't always been kind to Fonsi were mostly positive and liked what they heard. Moreover, and more importantly, the public loved the lead single, "Nada Es Para Siempre," and lined up in droves to buy the album when it was released in late summer. Paso a Paso debuted at number two on the Top Latin Albums chart, setting up yet another great run for Fonsi, who now found himself more aligned with successful yet inventive Latin stars like Juanes than the generic balladeers he had previously kept company with. His 2008 effort, Palabras del Silencio, was essentially a continuation of all that Fonsi accomplished with Paso a Paso, with the singer co-writing all of the 13 songs. The album earned double-platinum status in the U.S. and Venezuela, along with gold status in Spain, Mexico, Colombia, and Central America. Featuring the hit single “Gritar,” the album Tierra Firme followed in 2011. ~ Jason Birchmeier, Rovi