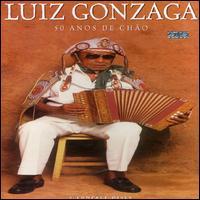 It is rare that someone who functions nominally as a folklorist or music historian becomes a celebrated performer, but one significant exception to this rule is the great Luiz Gonzaga. Colorfully attired (his most famous fashion accessory being his tasseled hat), and naked without his accordion, Gonzaga was a living, breathing representative of northeast Brazils' culture and music. Imagine if noted American musicologist Alan Lomax was as celebrated for his performing as he was for his cataloging and collecting and you get the picture. Gonzaga was indeed an archivist, but rather than spending his time in recording and cataloguing his findings for use in libraries, he became an oral historian, traveling throughout Brazil performing the indigenous music (and variations thereof) of his northeastern birthplace.

Born in the tiny farming town of Caicara in 1912, Gonzaga had little formal education as the hard life of farming put him in the fields at the age of seven. As a child Gonzaga was captivated by the stories of the Brazilian bandit/accordion player Lampiao (who died at the age of 36 in 1934). In Brazilian folklore, especially amongst those living in the northeast, Lampiao is sort of Robin Hood figure, an outlaw who served the poor and dispossessed, robbing from the rich and (mostly) giving to the poor farmers. While famous as a bandit, he was as well known for his considerable skill on the accordion his all-night dances/jam sessions. Seduced by Lampiao's romantic legacy (Gonzaga's ever-present hat was styled after one worn by Lampiao), Gonzaga took up the accordion about the same time he went into the fields. Soon, his father was accompanying him to area dances and parties where the young, Luiz was hailed as a child prodigy.

Military service interrupted Gonzaga's musical career, although while in the army he learned to play coronet. After his discharge he left the farm for the bright lights of Rio scuffling for jobs while making the bulk of his money playing in brothels. A chance meeting with the legendary Ary Barroso got Gonzaga a spot on Barroso's radio program and brought him to the attention of RCA records. In 1946, Gonzaga recorded "Baiao" a dance song with rhythms borrowed from an older form of Brazilian called the baiano, a dance that resembles the African-American ring shout. So popular was "Baiao" that Gonzaga had not only recorded a hit single but, in fusing the past with the present, created a whole new style of Brazilian music.

Gonzaga's popularity remained high during the 1950s, slipping during the '60s as the influence of rock and roll attracted the attention of younger audiences. It was the young stars of tropicalia (Caetano Veloso and Gilberto Gil among others) who championed Gonzaga's work in the early '70s, recorded his songs, and brought his music to the attention of Brazil's younger music fans. His career revived, Gonzaga, now approaching 70, toured steadily frequently appearing with the younger northeastern Brazilian artists who celebrated his dedication and genius. Gonzaga died in 1989 at the age of 77. ~ John Dougan, Rovi