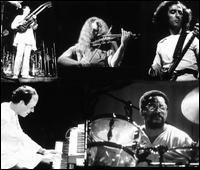 One of the premiere fusion groups, the Mahavishnu Orchestra were considered by most observers during their prime to be a rock band, but their sophisticated improvisations actually put their high-powered music between rock and jazz. Founder and leader John McLaughlin had recently played with Miles Davis and Tony Williams' Lifetime. The original lineup of the group was McLaughlin on electric guitar, violinist Jerry Goodman, keyboardist Jan Hammer, electric bassist Rick Laird, and drummer Billy Cobham. They recorded three intense albums for Columbia during 1971-1973 and then the personnel changed completely for the second version of the group. In 1974, the band consisted of violinist Jean-Luc Ponty, Gayle Moran on keyboards and vocals, electric bassist Ralphe Armstrong, and drummer Narada Michael Walden; by 1975 Stu Goldberg had replaced Moran and Ponty had left. John McLaughlin's dual interests in Eastern religion and playing acoustic guitar resulted in the band breaking up in 1975. Surprisingly, an attempt to revive the Mahavishnu Orchestra in 1984 (using Cobham, saxophonist Bill Evans, keyboardist Mitchell Forman, electric bassist Jonas Hellborg, and percussionist Danny Gottlieb) was unsuccessful; one Warner Bros. album resulted. However, when one thinks of the Mahavishnu Orchestra, it is of the original lineup, which was very influential throughout the 1970s. ~ Scott Yanow, Rovi