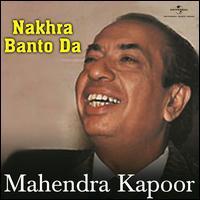 Mahendra Kapoor towers among the premier playback singers of the Golden Age of Hindi musical cinema, with hits like "Chalo Ek Baar Chalo" and "Neele Gagan Ke Taale" vaulting him to a level of celebrity rivaling the on-screen actors miming to his vocals. Born January 9, 1934, in Amritsar, India, Kapoor spent the majority of his childhood in Mumbai, where he claimed top honors in the all-India youth talent contest. His victory captured the attention of filmmaker Raja Nawathe, who cast him in 1958's Sohni Mahiwal. A year later, Kapoor launched into the top ranks of Bollywood singers when composer and musical director Ramchandra Chitalkar tapped him to perform the showstopping "Aadha Hai Chandrama Raat Aadhi" in the feature Navrang. Kapoor quickly proved himself a versatile talent even by Bollywood standards, performing in a number of regional Indian languages beyond his native Hindi -- within the subgenre of Marathi language productions, he was renowned as the playback singer of choice for superstar Dada Kondke -- and over time his repertoire expanded across more than 25,000 songs, becoming virtually synonymous with patriotic anthems when he delivered "Mere Desh Ki Dharthi" in Manoj Kumar's 1968 film Upkaar, a rendition that also earned Best Male Playback Singer honors from India's National Film Awards voters.

Kapoor remained a respected and popular figure across his five-decade cinema career, notching additional hits via 1970's "Iktara Bole," 1975's "Fakira Chal Chala Chal," and 1981's "Ab ke Baras." While his filmography embraces dozens of directors, he enjoyed his most fruitful collaboration with filmmaker B.R. Chopra, a partnership that extends across productions like 1959's Dhool Ka Phool, 1963's Gumrah, 1965's Waqt, and 1973's Dhund. From 1980 onward Kapoor appeared largely in small, regional films in the Punjabi and Bhojpuri tongues, and with son Rohan he mounted a series of live tours spanning across India and overseas. His contributions to the Bollywood industry were later recognized via the Indian government's Padmashri Award as well as the Madhya Pradesh government's Lata Mangeshkar Award. Poor health plagued Kapoor during the final years of his life, and he suffered a fatal heart attack in his sleep on September 27, 2008. ~ Jason Ankeny, Rovi