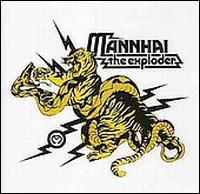 Finnish stoner rockers Mannhai (whose name derives from a legendary child-snatching demon from India's Uttar Pradesh region) were formed in Helsinki by guitarist Ilkka Laaksomaa and bassist Olli-Pekka Laine, shortly after the latter's departure from folk-metal legends Amorphis, in 1999. After recruiting young drummer Mikko Pietinen, Mannhai lured experienced singer Jani Muurinen -- previously with veteran Finnish hard rockers Xysma -- and proceeded to record their debut album, The Sons of Yesterday's Black Grouse, in 2001, following it in short order with their second, Evil Under the Sun, one year later. Both were supported by regular touring and drew comparisons to bands like Dozer, Spiritual Beggars, and Fu Manchu, but the band's third album, 2004's, The Exploder, found Mannhai experimenting with new influences (heavy metal, blues, '70s prog rock) and instrumentation, by employing a female backing vocalist and former Amorphis colleague, Kasper Mårtenson, on keyboards. Sadly, the album proved to be Mannhai's last with Muurinen, who quit that November to pursue his artistic studies; and then his replacement, Trond Skog, of the band Honcho, lasted only a few months before being fired midway through a European tour, in the spring of 2005. Finding themselves in desperate need of a singer, the remaining trio rang up their old friend Pasi Koskinen, who had only just parted ways with Amorphis, and, much to their surprise, he not only agreed to fly out and help them finish their tour, but carried on rehearsing with them back home in Helsinki. Come 2006, the reworked Mannhai lineup recorded the group's fourth, back-to-stoner-basics long-player, Hellroad Caravan, and although long-serving drummer Pietinen called it quits later that year, the group headed out on tour, regardless, with a temporary replacement in Nalle Österma. ~ Eduardo Rivadavia, Rovi