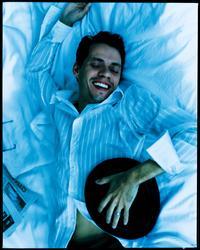 A multi-talented artist, Marc Anthony (born Marco Antonio Muñiz) has balanced an acting career with a musical career. In addition to appearing in films like The Substitute, Big Night, and Hackers, and in Broadway productions such as Paul Simon's The Capeman, Anthony rose to the top level of Latino music. The biggest-selling salsa artist of all time, Anthony was included on a Top Ten list of influential New Yorkers compiled by New York Magazine.

Instructed in music theory and composition by his father, Anthony grew up listening to Latin musicians, including Rubén Blades, Hector Lavoe, and Willie Colón, and contemporary pop recordings by Air Supply and José Feliciano. At age 12, Anthony and his sister were discovered by David Harris, a producer of demos and commercials; Anthony was hired to sing background on several productions. His songwriting skills became evident, and an early composition, "Boy, I've Been Told," became a Top 40 hip-hop hit for school friend Safire. Anthony subsequently sang background vocals on Safire's debut album. He also sang on albums by the Latin Rascals and Menudo.

Teaming with producer and disc jockey Little Louie Vega, Anthony recorded his debut album, When the Night Is Over, in 1991. The Latin hip-hop-style album, which featured guest appearances by Tito Puente and Eddie Palmieri, included the single "Ride on the Rhythm," which reached the top slot on Billboard's dance music charts. On November 22, 1991, Anthony was the opening act on a show at Madison Square Garden that celebrated Puente's 100th album release. Anthony's second album, Otra Nota (produced and arranged by Sergio George), was a better representation of Anthony's salsa roots and included the original tune "Juego o Amor." Todo a Su Tiempo, released in 1995, was a continuation of Anthony's collaboration with George.

With his fourth album, Contra la Corriente, Anthony began working with producer/arranger Angel "Cucco" Peña, and it won the 1999 Grammy for Best Tropical Latin Performance. A self-titled English-language album released in 1999 was an overt attempt at crossing over to the mainstream, and it did reach the Top Ten of the main Billboard album chart, with "I Need to Know" peaking at number three. While 2002's Mended was an even greater commercial success, Anthony continued to release Spanish-language albums that were closer to his roots, like 2001's Libre and 2004's Amar sin Mentiras. His profile was only raised by starring as salsa legend Héctor Lavoe in 2007's El Cantante, which co-starred his wife, Jennifer Lopez. All of the Lavoe songs in the film were also sung by Anthony, and the El Cantante soundtrack album was released featuring these versions.

In 2010 he released another Latin album, Iconos, on which he covered classic pop ballads. Anthony and Lopez separated in 2011, eventually divorcing in 2012, but continued to work together on the Latin talent search show Q'Viva! The Chosen. Anthony appeared on Robi Draco Rosa's comeback-from-cancer recording Vida in the spring of 2013. He also issued "Vivir Mi Vida," which topped Billboard's Latin Songs chart for eight straight weeks before his highly anticipated return-to-salsa album, 3.0, was released in July. ~ Craig Harris, Rovi