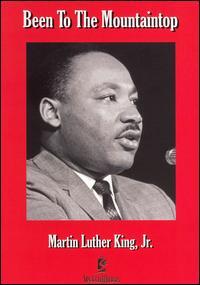 Civil rights champion Martin Luther King, Jr. was born in Atlanta, GA, on January 15, 1929; progressing through Morehouse College, Crozer Theological Seminary, and Boston University, he grew increasingly influenced by Mahatma Ghandi's non-violent strategies for social change, completing his Ph.D. in systematic theology in 1955. Rejecting a series of academic offers, King instead opted to become pastor of Montgomery, AL's Dexter Avenue Baptist Church; on December 5, 1955 -- just five days after Rosa Parks' landmark refusal to conform to the city's segregationist busing policies -- he was named president of the new Montgomery Improvement Association, setting his public career into motion. Spearheading the local African-American community's boycott of the city's bus system, King rose to national renown, even as his house was firebombed and he faced conviction on charges of conspiracy against the bus company. Still, as 1956 drew to a close, Montgomery's buses became integrated and the United States Supreme Court declared Alabama's segregation laws unconstitutional.

In 1957, King joined with other African-American religious leaders to found the Southern Christian Leadership Conference; a year later, he published his first book, Stride Toward Freedom: The Montgomery Story. As the 1960s dawned, he was widely regarded as black America's preeminent spokesman, although his policies of non-violence were often in conflict with younger, more militant factions of the civil rights movement; mass demonstrations in communities throughout the U.S. culminated in the August 28, 1963, march on Washington, D.C., where, on the steps of the Lincoln Memorial, King delivered his celebrated "I have a dream" speech to an audience of over 250,000 protesters. That December he was named Time magazine's Man of the Year, and a year later collected the Nobel Peace Prize. However, internal divisions within the black community threatened to undermine his leadership, as emerging voices like Malcolm X and Stokely Carmichael offered a stark counterpoint to King's peaceful methods.

Of course, King encountered his greatest resistance from white leaders -- FBI Director J. Edgar Hoover waged a bitter war of surveillance and harassment, declaring him "the most dangerous man in America, and a moral degenerate." King also lost the support of many white liberals for his criticism of the United States' involvement in the escalating conflict in Vietnam. Still, he forged on, mounting a 1965 march from Selma to Montgomery march which proved pivotal in the passage of the Voting Rights Act later that year. While in Memphis, TN, to speak out on a local sanitation workers' strike, King was assassinated on April 4, 1968; although James Earl Ray was convicted of the murder, the case remains a source of controversy and conjecture even decades after the fact. In the wake of his death, his widow, Coretta Scott King, established the Martin Luther King, Jr. Center for Nonviolent Social Change, and in 1986 his birthday was declared a federal holiday. Many of King's most celebrated speeches are available as commercial recordings. ~ Jason Ankeny, Rovi