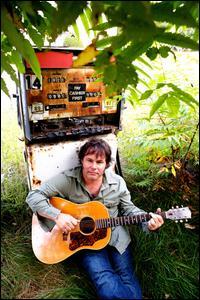 Martin Sexton was one of the most talked-about arrivals on the "new folk" acoustic music scene. The guitarist, singer, and songwriter has an amazing vocal range and makes effective use of it on his recordings and in his live shows. Unlike so many other contemporary singer/songwriters, his vocal style can be described as truly soulful, combining the best qualities of singers like Van Morrison, Al Green, Aaron Neville, and Otis Redding.

Sexton, a self-taught guitarist and singer, was raised in a family of 14 and formed his first rock & roll band in eighth grade. In high school he was in a profusion of garage bands, playing the music of the Beatles, Janis Joplin, Jimi Hendrix, and Led Zeppelin. He left his home in Syracuse, NY -- and the rock & roll life -- in 1988 and headed for Boston, encouraged by what he'd heard about the coffeehouse scene in that city. Despite the ultra-competitive nature of the Boston scene, with too many folksingers and too few coffeehouses, Sexton quickly rose through the ranks. He began playing his brand of soul-filled folk music around Boston's open-mike nights and street corners in 1989.

In 1991 he released his own record, In the Journey, in cassette format, and much of the material on this and Black Sheep, his 1996 debut for Eastern Front Records, is autobiographical in nature, concerning his life on the road. Remarkably, Sexton sold 15,000 copies of his cassette-only album through the strength of his live shows and grueling tours around the U.S. In 1994, Sexton won the National Academy of Songwriters' Artist of the Year Award. By 1996, Sexton was sharing stages with Art Garfunkel, Jackson Browne, and John Hiatt on tours. Sexton subsequently signed a deal with Atlantic Records, releasing The American in 1998 and Wonder Bar in 2000. Sexton continued to tour, building a sizable following throughout the States. He released the Christmas-themed Camp Holiday in November 2005, followed by the intriguing Seeds in 2007. Sugarcoating, produced by Sexton and Crit Harmon, appeared in 2010, followed by the politically charged, five track EP Fall Like Rain in 2012. ~ Richard Skelly, Rovi