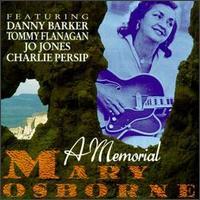 Mary Osborne was a whiz of an electric guitarist and a forthright, madly swinging, inventive player in whom one can hear her original musical inspiration, Charlie Christian, as well as the grace notes and humor of Les Paul. In addition, she was one of only a handful of women in her day who were able to make a dent in jazz's gender barrier, although she did not achieve the recognition that ought to have been her due. Osborne was a versatile musician as a child, playing the violin in a school orchestra and performing on violin, guitar, bass, as well as singing and dancing, in a trio at age 15. Having heard Charlie Christian play with Al Trent's band in Bismarck, she decided to focus upon the electric guitar, on which she became one of jazz's earliest exponents. She toured with a laundry list full of bands -- Buddy Rogers, Dick Stabile, Terry Shand, Joe Venuti, and Russ Morgan among them -- and with the encouragement of producer/critic Leonard Feather, she recorded with Mary Lou Williams, the Beryl Booker Trio, Coleman Hawkins, Mercer Ellington, Ethel Waters, and Wynonie Harris. She was also featured on Jack Sterling's daily CBS radio program from 1952 to 1960. Sometime later, Osborne settled with her husband in Bakersfield, CA, where she continued to play gigs now and then. Yet she remained a formidable guitarist late in life; in an appearance with Lionel Hampton at the 1990 Playboy Jazz Festival, she virtually stole the show. She can be heard to good advantage on the Williams and Booker tracks of Bluebird's The Women: Classic Female Jazz Artists CD. ~ Richard S. Ginell, Rovi