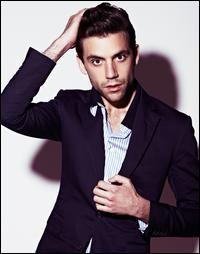 Pop magpie Mika's bright, kaleidoscopic music has drawn comparisons to everyone from Queen and Elton John to the Scissor Sisters and Rufus Wainwright. Born Michael Holbrook Penniman in Beirut to a Lebanese mother and American father, Mika and his parents moved to Paris while he was still a very young child, and eventually London by the time he was nine years old. The frequent moves, incidents like his father being taken hostage at Kuwait's American Embassy, and bullying at school affected young Mika to the point where he stopped talking and was taken out of school for six months.

At this point, music became Mika's lifeline, and he soon began formal musical training, which included voice lessons. Along with studies at the Royal College of Music, in his teens and early twenties Mika also recorded with the Royal Opera House and created a jingle for Orbit chewing gum. He dropped out of school to concentrate on his take on pop music, inspired by freewheeling songwriters like Prince and Harry Nilsson. His debut single, "Relax, Take It Easy," appeared in fall 2006, but it was its follow-up, "Grace Kelly," that broke Mika in the U.K. Released in January 2007, the song hit number one on the singles chart thanks to heavy downloading, following in the footsteps of Gnarls Barkley's "Crazy." Mika's full-length debut, Life in Cartoon Motion, did just as well when it was released that February, and was topping the U.K. charts around the time it was released in the U.S. that March. The album sold over five million copies worldwide, and Mika earned a 2008 Grammy nomination for Best Dance Record for "Live Today" as well as that year's Ivor Novello Award for Songwriter of the Year, among other accolades.

Mika collaborated with producer Greg Wells, Imogen Heap, and Final Fantasy's Owen Pallett on his second album. Initially named We Are Golden after its lead single, the album's title was changed to The Boy Who Knew Too Much for its fall 2009 release. After spending much of 2010 and 2011 on the road, Mika assembled a team of collaborators for his third album, The Origin of Love, that included Pharrell Williams and Empire of the Sun's Nick Littlemore, who appeared on the single "Celebrate," as well as William Orbit, Benny Benassi, FrYars, Greg Wells, and Klas Åhlund. One of the songs from this period, "Gang Bang," ended up on Madonna's MDNA album. The Origin of Love arrived in October 2012. ~ Heather Phares, Rovi