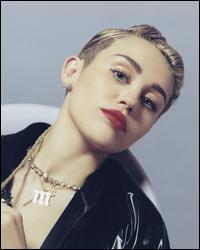 Miley Cyrus became an overnight sensation in 2006 as the lead of the Disney Channel television series Hannah Montana, but as the years went on, she established herself as a pop star in her own right. Overnight popularity wasn't a new thing for the Cyrus family; Miley's father, country singer Billy Ray Cyrus, went from obscurity to stardom in a few short months in 1992, when "Achy Breaky Heart" became a crossover hit. The success of "Achy Breaky Heart" was hardly the only memorable event for Billy Ray that year, though, as he and his wife welcomed their daughter Destiny Hope Cyrus into the world on November 23, 1992. Destiny's cheerful disposition as a child earned her the nickname Smiley, which stuck when it was shortened to Miley.

Miley's career as a professional actress began in 2003, when she appeared alongside her father in an episode of the television series Doc. The same year, she landed a small role in the Tim Burton film Big Fish. The budding actress had also developed an interest in writing songs and learning how to sing, and in 2005, she landed a role that allowed her to put her skills in acting and music to work. Miley was cast in the title role of Hannah Montana, in which she played a teenage girl leading a double life: by day, she's Miley Stewart, an ordinary kid dealing with school, friends, siblings, and all the other foibles of life for a 14-year-old, while at night she dons a wig and becomes Hannah Montana, a multi-platinum pop star whose career is guided by her dad, songwriter Robby Stewart. Miley's friends don't know she's also Hannah, however, and keeping this a secret is no simple matter. After debuting in March 2006, Hannah Montana became an immediate success with young viewers and led to the release of a soundtrack CD in October, featuring Miley singing eight songs from the show along with five related tracks (including a duet with her father, Billy Ray, on "I Learned from You").

Breakout arrived in summer 2008. It topped the Billboard charts and quickly went platinum, paving the way for an even more successful year in 2009. Hannah Montana: The Movie was released that March and peaked at number one, while the soundtrack's lead single -- a country-pop ballad called "The Climb" -- became one of the year's most omnipresent songs, giving Miley her first multi-platinum hit. A short album, The Time of Our Lives, arrived several months later and yielded another hit with "Party in the U.S.A.," which charted inside the Billboard Top Ten for 16 weeks. Cyrus performed the song on the "Wonder World Tour," her first international tour, and also found time to film another movie, The Last Song, which hit theaters in 2010. With acting assuming such a large role in her life, Cyrus announced her decision to take a hiatus from music -- but not before the release of her third album, Can't Be Tamed, which appeared that summer.

After making a number of television appearances and appearing in the films LOL and So Undercover, Cyrus decided to return to music, choosing to go in a more grown-up direction by enlisting a number of popular rap producers, including Pharrell Williams. The resulting effort, entitled Bangerz, combined crunky beats with synth pop, electro, and stadium rock tropes. Released in October 2013, it was promoted by Cyrus with a controversial performance at the MTV VMAs, which seemed to get the whole world talking about her. ~ Mark Deming & Andrew Leahey, Rovi