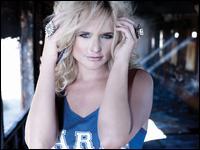 Before becoming one of country music's most popular females, songwriter Miranda Lambert grew up in Lindale, Texas, a small town 80 miles east of Dallas. The daughter of a country guitarist (Rick Lambert) and a detective agency owner, she was raised in a house dedicated to country music. Lambert began entering country talent contests when she was 16, including an appearance with the Johnny High Country Music Review in Arlington, Texas. She learned to play guitar and began writing her own songs while continuing to enter various competitions, one of which earned her an appearance in a potato chip advertisement and the 2001 teen comedy Slap Her She's French. At 17 years old, she formed the Texas Pride Band and began gigging professionally, and later in 2001 -- with financial help from her father -- she showcased her songwriting skills by releasing an independent CD, Miranda Lambert. Two of the album's tracks, "Texas Pride" and "Somebody Else," even entered the Texas music charts.

In 2003, Lambert successfully auditioned for Nashville Star, a reality TV series modeled after the American Idol format. She decamped to Nashville in order to appear on the show and eventually finished third in the competition, which led to a recording contract with Sony. Still only 21 years old, she released her first major-label single, "Me and Charlie Talking," in 2004, with the full-length Kerosene following in 2005. Lambert wrote or co-wrote ten of the album's 11 tracks, several of which became popular singles on country radio, and Kerosene eventually went platinum.

Crazy Ex-Girlfriend experienced similar success upon its release in 2007; moreover, it established Lambert as one of country's newest "bad girls," a designation that nodded to the fiery temperament of her music. Lambert's songs spun tales of cheating boyfriends and domestic abuse, and they almost always ended with the singer extracting violent, spectacular revenge on her aggressors. For 2009's award-winning Revolution, however, she branched out into other subjects, drawing upon a happy (and highly publicized) relationship with fellow country star Blake Shelton while writing songs about love, regret, and childhood. Like the two albums before it, Revolution went platinum. Lambert wrote or co-wrote six of the 14 tracks on her next outing, Four the Record, which appeared in the fall of 2011. ~ Steve Leggett & Andrew Leahey, Rovi