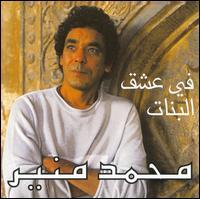 One of the greatest Egyptian pop superstars of his time, Mohamed Mounir rose to fame in the 1980s with a Nubian musical style and socially minded lyrics. Born on October 10, 1954, in Aswan, Egypt, he grew up in the village that was displaced by the construction of the Aswan Dam in 1970. He later moved from Aswan to Cairo, where he studied at the University of Helwan. As an aspiring Egyptian pop singer, he was taken under the wings of poet Abdul Rahim Mansour and Nubian folk musician Ahmad Mounib. Upon signing a recording contract with the label Sonar, Mounir made his full-length solo album debut with Alemony Eneeki (1977). In addition to lyrics written by Mansour and music composed by Mounib, Alemony Eneeki features arrangements by Hany Shenuda, who worked with Mounir again on the follow-up album, Bnetweled (1978). During the '80s, Mounir worked extensively with Yehia Khalil and his band on the albums Shababeek (1981), Etkalemy (1983), Bareea (1986), and West El Dayra (1987). Mounir had risen to great heights of fame in the Egyptian pop world by this point, and was known as the King. Meanwhile, he had also established himself as an actor, appearing in films like Hadotta Masreya (1982), Al Yom Al Sades (1986), and Yom Mor, Yom Helw (1988). During the '90s, Mounir's music grew increasingly serious in terms of culture, society, and politics. The terrorist attacks of September 11, 2001, affected him deeply, resulting in the album El Ard... El Salam (2002), whose title tranlates to "Earth.... Peace." Successive albums include Ahmar Shafayef (2003), Hawadet (2004), Embareh Kan Omry Eshren (2005), and Ta'm El Beyout (2008). Increasingly popular in the western world, Mounir was featured on the song "Yasmine" from German pop band Ich + Ich's chart-topping album Gute Reise (2009). ~ Jason Birchmeier, Rovi