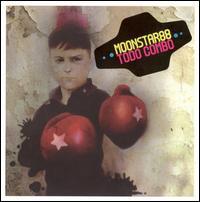 Occupying the border between mainstream pop and alternative rock, the Philippines' Moonstar 88 are often dismissed by underground purists as being poseurs, but the group's melodic and heartfelt songs about love and God bring them closer to the innocuous jangle of Sixpence None the Richer than the post-punk cliques that question them. Consisting of Acel Bisa (vocals, guitar), Teng Marcelo (guitar, vocals), Herbert Hernandez (guitars), Paolo Bernaldo (bass), and William Pineda (drums), Moonstar 88 formed in Manila, Philippines in February 1999. The group toured the city's club circuit and cafes; they became a live favorite at colleges, often performing at universities. On May 8, 1999, Moonstar 88 recorded their first demo, a five-track CD. In early 2000, the band finished a few more songs and sent the demo to Philippine label Alpha Records. The company soon signed them to their Harmony Music imprint, and they entered the studio for their debut album, Popcorn, on July 2000. Released in 2001, when the macho aggressiveness and two-fisted rage of grunge no longer had mass appeal, Popcorn received warm reviews from critics and was played on both Top 40 and alternative radio stations. Bisa's soft, sweet voice drew comparisons to Harriet Wheeler of the Sundays and Dolores O'Riordan of the Cranberries, but the group's real kindred spirit was Sixpence None the Richer, especially with their Christian lyrics, similarly tender female vocals, and folk influences. Moonstar 88 eventually won Song of the Year for "Sa Langit" ("In Heaven") as well as awards for Band of the Year and New Artist of the Year. The group's second full-length, Press to Play, brought even more raves and commercial success. The band's young fans, nicknamed "Moonies," took them to the upper regions of the OPM (Original Philippine Music) charts. Rowing between the waters of easy listening and modern rock, Moonstar88 have managed to attract followers in the Philippines from both genres. ~ Michael Sutton, Rovi