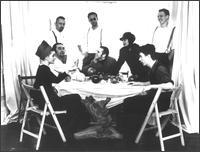 Some of the most unusual sounds in contemporary Celtic music were created by Edinburgh-based band, Mouth Music. Combining the mouth music (puirt-a-beul) tradition of Gaelic Scotland with African rhythms, the group fused the two musical cultures into a truly unique sound. According to Entertainment Weekly, "Mouth Music's combination of intelligence, beauty and nerve has the power to unite both world beatniks and mainstream rock fans in mutual exhilaration."

The concept that resulted in Mouth Music was conceived after British composer Martin Swan heard American-born and Scotland-based vocalist Talitha MacKenzie performing Gaelic tunes in a village hall in South Uist. Inspired by David Byrne and Brian Eno's album, My Life in the Bush of Ghosts, Swan convinced MacKenzie to fuse their diverse talents as a duo, Mouth Music. Much of the group's early repertoire was based on traditional Gaelic songs discovered by MacKenzie while she was studying Scottish and Gaelic cultures in Edinburgh.

After MacKenzie left to pursue a solo career, following the release of Mouth Music's self-titled debut album, Swan reorganized Mouth Music with Jackie Joyce, a Scotland-born singer of Ghanaian descent, assuming lead vocal responsibilities. The band was rounded out by James MacKintosh, Queen MacArthur, Michaela Rowan and Jeremy Black. The larger group made its recording debut, in 1992, with an EP, Blue Door Green Sea, recorded with vocalist Mairi McInnes. Since the demise of Mouth Music in 1995, members have gone on to perform with a variety of bands. ~ Craig Harris, Rovi