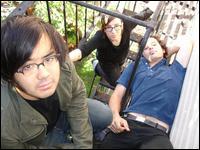 Named after the fictional skyscraper that was the setting for Bruce Willis' first Die Hard movie, Nakatomi Plaza are a melodic post-hardcore trio from Brooklyn whose music fuses the calming drones of Sonic Youth and My Bloody Valentine with the aggression and whiplash dynamics of Fugazi and its many followers. Through its many lineup changes, the band's sole constant has been singer/songwriter and guitarist Oscar Rodriguez, a native of the Providence, RI, suburb of Warwick with a lyrical sense focused on themes of social injustice. Rodriguez formed Nakatomi Plaza in Providence in 1998 with an initial lineup of himself, guitarist Matt Galek, bassist Meredith Donnelly, and drummer Liam Hurley. By the following year, Donnelly was replaced by bassist Al Fair, whose feminine counterpoint vocals quickly became one of the band's sonic trademarks.

This lineup released the first Nakatomi Plaza album, By Chester Copperpot, but by the time of its follow-up, the band had slimmed to a trio with Galek's departure and had relocated from Providence to Brooklyn. Following the two-stage release of Private Property (originally a self-released EP in 2001, it was expanded to a full-length on Immigrant Sun Records the following year), Hurley followed Galek out of the band and second guitarist Joel Remland joined for touring purposes. This was followed by an extended period of personnel instability, with Hurley replaced first by Andrew De Stefano, who himself was replaced by Max Goldman before Lou Maiolica took the drummer throne permanently. Recordings made with Remland, De Stefano, and Goldman appear on Nakatomi Plaza's long-delayed third album, aptly titled Unsettled and released in early 2007. ~ Stewart Mason, Rovi