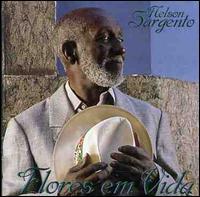 As the composer of over 400 songs, including the classics "Samba, Agoniza Mas Não Morre" (recorded by Beth Carvalho in 1978) and "Cântico à Natureza/Quatro Estações do Ano" ("Primavera"), Nelson Sargento is associated with the history of samba beginning in 1934 when he was parading at the Azul e Branco samba school at the age of ten. He was a member of A Voz do Morro, recording albums with Paulinho da Viola, Zé Kéti, Elton Medeiros, Jair da Costa, Anescarzinho, and José da Cruz. He also wrote anthological sambas with Cartola, Carlos Cachaça, Daniel Gonzaga, and Darcy da Mangueira, having had success with "Nas Asas da Canção" (with Ivone Lara), "Falso Amor Sincero," "Vai Dizer a Ela" (with Carlos Marreta), and "Idioma Esquisito." His first samba-enredo was "Rio São Francisco" (with Alfredo Português in 1948), for Mangueira. His "Cântico à Natureza" (samba-enredo considered one of the ten best-ever presented by Mangueira; was co-written with his stepfather Alfredo Português and Jamelão) was presented by Mangueira at the Carnival of 1955 and received second place in the competition; the song was recorded by Jamelão and earned success. Sargento participated in historic shows with Rosa de Ouro (1965) and was also a part of the Os Cinco Crioulos, recording albums with both groups. The international career of this wallpainter began in 1990 when he went to Japan for the first time, having also recorded and released albums in that country. Sargento, a primitivist painter who has realized several individual exhibitions, also wrote books (Prisioneiro do Mundo and Um certo Geraldo Pereira) and acted in movies (O Primeiro Dia, by Walter Salles/Daniela Thomas; the awarded documentary Nelson Sargento da Mangueira, by Estevão Pantoja; and Orfeu do Carnaval, by Cacá Diegues, among others). ~ Alvaro Neder, Rovi