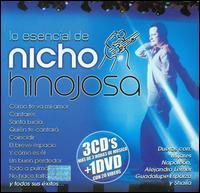 Latin troubadour Nicho Hinojosa (born Dionisio Hinojosa) began singing at the age of eight. Influenced by classic rock bands, he started playing drums in a local ensemble, emerging as a multi-instrumentalist after attending Monterrey's Escuela Superior de Música y Danza, a prestigious Mexican school of music and dance. In 1993, the singer/songwriter joined a collective called Guitarras por el Mundo (Guitars around the World), issuing String Five and a self-titled album. That same year, Hinojosa debuted as a solo artist with the release of Detrás del Horizonte. The Latin division of BMG signed him up before releasing En el Bar in June 2002. ~ Drago Bonacich, Rovi