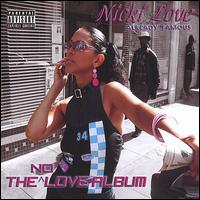 Australian native Nicky Love isn't a pop princess with her heart on her sleeve. She's her own diva, a stylish one at that, but it took years for this singer/songwriter to confidently mold herself into what she wanted. While growing up in Sydney, Love frequently moved around and sought solace in performing music and dance. Her twirling in front of the mirror as a child, acting like Olivia Newton-John pushed her into acting as a teenager, and she landed brief spot on the local Australian show The Freaked-Out Flower Children. While visiting a friend in London, she found herself thinking about changes and knew she had to make some moves. She moved away from her family, renting a flat in London and that turned into a wild party of traveling across Europe and ignoring her musical passions. Personal setbacks and the tragic deaths of her father, grandfather, grandmother, and the suicide of a friend shocked Love back into reality. She got her life together and began writing songs with friend, Emile Lobo. She instantly noticed her gift and years of progression inked her a deal with DreamWorks. Robbie Robertson was impressed by her aching and reflective pop stylings, he signed her after he heard her demos. Her debut, Honeyvision, was produced by Marius de Vries (Bjork, Annie Lennox, Massive Attack) for DreamWorks, but as of 2002 still didn't see release. ~ MacKenzie Wilson, Rovi