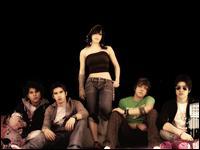 Baja California/Mexicali-based rock group Nikki Clan had barely formed when they were met with enormous industry success in 2006. Bandmembers Alberto Espinoza (bass), José Antonio Dabdoub (guitar), Ángel Vázquez (guitar), and José Carlos Fausto Monroy (drums) had been performing under the name Los Piltrafas when they were contacted by producer Abelardo Vázquez; a veteran of Mexican rock staples like Reik, he possessed both the connections and vision necessary to take the group to international acclaim. With a vision for developing the group's raw, natural sound into something more marketable, Abelardo Vázquez introduced Los Piltrafas to vocalist Yadira Gianola. The young musicians felt an instant chemistry, and Nikki Clan were born. By April of the year, the group began working on original material for a demo, under Vázquez's guidance. A few short months later Nikki Clan presented the songs "Mírame" and "Dimelo a Mí" to execs at Sony BMG. By the end of 2005 Nikki Clan were offered a five-album deal, and set to work on their debut record. The band's self-titled record, Nikki Clan, was released in 2006 to rave reviews. The album was carried to number ten on the Mexican pop charts on the strength of the hit single "Mírame." ~ Evan C. Gutierrez, Rovi