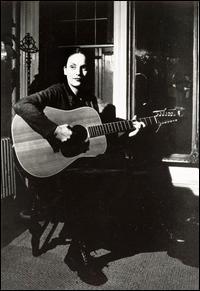 New York City singer/songwriter Nina Nastasia creates intimate, spectral music that evokes some lost, skewed take on Americana and that is often laced with haunting strains of viola, cello, and bowed saw. She counts among her admirers the notoriously picky, celebrated producer Steve Albini (Nirvana, Pixies), who engineered her first two albums and who has vehemently sung her praises. Nastasia's debut, Dogs, was released in 1999 on the tiny indie Socialist Records, but was out of print by the end of 2000. For April 2002's The Blackened Air, she signed with Touch & Go, which released her follow-up recording, Run to Ruin, in 2003 (also recorded by Albini) and a reissue of Dogs in summer 2004. Though she kept the rest of her recording partners (including Albini and drummer Jim White [Dirty Three]) the same, Nastasia moved to Fat Cat for 2006's On Leaving and 2007's You Follow Me. After a three-year break, Nastasia returned with Outlaster (also on Fat Cat), which was an altogether much more fleshed-out affair. Engineered by Albini, the album contained chamber strings, a French horn, and a small woodwind section with drummer Jay Bellerose, as well as bassist and session arranger Paul Bryan. ~ Erik Hage, Rovi