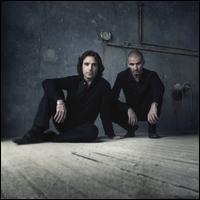 Spanish techno-pop duet OBK was formed in the 1980s after Miguel Arjona and Jordi Sánchez met at Sant Feliu de Llobregat, Barcelona. Inspired by European techno, the young musicians decided to create their own project called OBK, their name is based on Depeche Mode's "Oberkorn." After performing at local venues, the act released its first album, called Llámalo Sueño, in 1991, followed by 1993's Momentos de Fe and 1995's Trilogia. ~ Drago Bonacich, Rovi