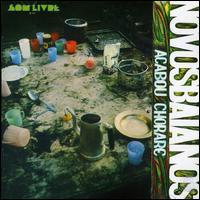 Os Novos Baianos was a vocal/instrumental group formed in Salvador, BA, in the late '60s who had a noted role in the fusion of rock with Brazilian folklore rhythms for the evolution of MPB. The group was constituted by Paulinho Boca de Cantor (vocals/pandeiro), Morais Moreira (vocals/violão, or acoustic guitar), Baby Consuelo (now Baby do Brasil, vocals/percussion), and Luís Galvão (lyricist). At the same time, Pepeu and his brother, Jorginho Gomes, were members of the professional group Os Leifs. In early 1969, Gilberto Gil and Caetano Veloso invited Pepeu to accompany them in their farewell show before the exile, Barra 69. Os Novos Baianos, then an unknown group, saw Os Leifs at the Barra 69 and proposed to them that the two bands play together because of their strong instrumental background. So Os Leifs joined Os Novos Baianos in their opening in the Southeast with the show Desembarque Dos Bichos Depois do Dilúvio in 1969, after the presentation of the same show in Salvador, BA, the previous year. This was followed by the first Os Novos Baianos LP, Ferro Na Boneca. In the same year, the group disputed the V FMPB with "De Vera" (Morais/Galvão), included in their first LP. In 1972, after a stint with João Gilberto the previous year, the group dedicated themselves to research on Brazilian musical roots, and the result is evident on their second LP, Acabou Chorare, a milestone in the MPB discography (also mixing choro, frevo, samba, and other genres). The group recorded another LP, Novos Baianos F.C., and disbanded in 1978, with their members departing for solo careers after Moreira set the example. In 1997, Baby do Brasil, Pepeu, Morais Moreira, and Paulinho Boca de Cantor teamed again for the release of the book Anos 70: Novos e Baianos by Luís Galvão (Editora 34), and once more for the commemoration of Moreira's 50 years. All of them, including Galvão, grouped for the recording of Infinito Circular (Polygram, 1997). ~ Alvaro Neder, Rovi