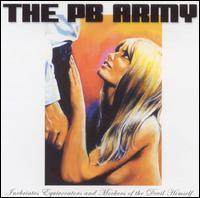 Since their formation in the early 2000s, PB Army has gained a reputation for being one of the more clean-sounding bands in the stoner rock field. Keith Bergman, the Toledo, OH-based trio's lead singer and drummer, has described PB Army's sound as "stoner pop metal," but he didn't mean pop-metal as in Ratt, Quiet Riot, D'Molls, Bon Jovi or Twisted Sister -- Bergman wasn't comparing his group to '80s hair bands. Rather, Bergman's point was that PB Army was striving to be melodic and musical as well as heavy, loud, and hard-driving; they're about aggression, but they're also about musicality and intricacy. The Midwestern headbangers have brought a variety of influences to their work: '70s heavy metal and hard rock bands like Budgie, Led Zeppelin and Blue Öyster Cult are influences; PB Army has also been influenced by '80s favorites Iron Maiden as well as Queens of the Stone Age, Voivod, Alice in Chains and grunge innovators Nirvana. Another influence is, of course, the seminal Black Sabbath, which is hardly an unusual influence for a stoner rock group. In stoner rock, having some type of Black Sabbath influence is almost obligatory, and PB Army is no exception to that rule. Saying that the vast majority of stoner rock bands worship and adore Ozzy Osbourne-era Sabbath would be an understatement.

PB Army was formed in Toledo in early 2001, when two ex-members of the local band Chicken Dog -- Bergman and guitarist Micah Shimborske -- decided to put together a new band. The name PB Army was derived from Pabst Blue Ribbon, a beer that is quite popular in the Midwestern United States. From the beginning, Bergman and Shimborske (who also provides background vocals and the occasional lead vocal) wanted to go with a power trio format -- and on their first live gig, the bass spot was filled by guest Schmid (who, at the time, was the lead singer/bassist for the Toledo-based alternative metal band Evolotto). After that, Bergman and Shimborske found a permanent bassist when Mahlon Orrin came onboard. In early 2002, Bergman, Shimborske, and Orrin traveled to Chicago and recorded PB Army's debut album, Inebriates Equivocators and Mockers of the Devil Himself; they produced it with Randy Wilson, a local Windy City producer, engineer, and keyboardist who has also worked with Nitzer Ebb, the eccentric Puerto Muerto, and singer/songwriter Liz Phair, among others. Wilson, in fact, produced Chicken Dog's 1997 release The Other White Meat; so PB Army weren't his first encounter with Bergman and Shimborske. Sin Klub Entertainment -- the small, Toledo-based, very metal-friendly indie label that Chicken Dog had recorded for -- released Inebriates Equivocators and Mockers of the Devil Himself in early 2003. ~ Alex Henderson, Rovi