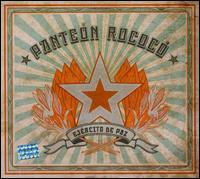 Latin rock band from Mexico Panteón Rococó was formed in the mid-'90s, recording its first EP, called Pa' Mi Negra, in 1997. The following year, the group participated in a double-album called Eskuela De Baile, contributing with two of its original songs, "L'America" and "Curame." A similar compilation called Puro Eskañol came a year later, including Panteón Rococó's "Borracho." In 1999, the ten-piece Latin ska and reggae band was awarded at an event known as Skalaria for being the Best Local Ska Performer. In October of that same year, Panteón Rococó released its debut album, A La Izquierda De La Tierra. ~ Drago Bonacich, Rovi