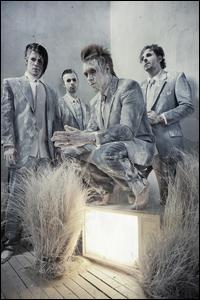 Starting out as a punk- and rap-influenced band, the northern Californian group Papa Roach eventually grew into a straight-ahead hard rock ensemble with strong heavy metal leanings. Consisting of Coby Dick, Jerry Horton, Dave Buckner, and Tobin Esperance, Papa Roach formed in 1993 and began releasing EPs soon after, including 1994's Potatoes for Christmas and 1995's Caca Bonita. By 1996, the group had replaced original bassist Will James with Esperance and hired a new manager; the following year, Papa Roach released their first full-length album, Old Friends from Young Years, which became a surprise hit on local radio.

The band's regional success led to more prominent gigs, including dates with Suicidal Tendencies, Sevendust, and Powerman 5000, and a deal with Dreamworks Records, which released Papa Roach's second album, Infest, in early 2000. The album went triple platinum thanks to the success of "Last Resort," an intensely popular single that helped make Papa Roach one of the most beloved hard rock acts of the new millennium. Two years later, frontman Coby Dick opted to go by his given name of Jacoby Shaddix, and a new album, lovehatetragedy, was released that June. Stylistically, the band had begun to grow beyond its rap-rock roots and the new tracks showcased a slightly more mature, melodic, and straightforward hard rock sound. That same summer, however, the band joined a number of rap acts -- including Ludacris and Xzibit -- on Eminem's Anger Management Tour.

In 2004, Papa Roach released their fourth studio effort, Getting Away with Murder. Buoyed by the success of the single "Scars," Getting Away with Murder sold well and eventually went platinum. Two years later, Papa Roach began work on their fourth studio album at the infamous and historical Paramour mansion in Hollywood, once the home of silent movie star Antonio Moreno. Released in fall 2006, The Paramour Sessions featured a heavy L.A. rock aesthetic and generated two Top 10 rock singles, although its sales stalled around 400,000 copies. Drummer Dave Buckner exited the lineup one year later; after filling the empty seat with Unwritten Law's Tony Palermo, Papa Roach hit the road to support The Paramour Sessions with tour dates alongside Seether and Staind. They remained on the road after joining Mötley Crüe's Crüe Fest in 2008, but the band also found time to return to the Paramour mansion, where they launched songwriting sessions for another album. Released in early 2009, Metamorphosis found Papa Roach reprising their interpretation of metallic hard rock and reuniting with Infest producer Jay Baumgardner. Papa Roach parted ways with Interscope in 2010 and signed a deal with the independent Eleven Seven label. The career-spanning collection The Best of Papa Roach: To Be Loved also appeared in 2010. The band's first album for Eleven Seven, Time for Annihilation, combined new cuts and live re-recordings of their hits and appeared in August of 2010. In 2012, Papa Roach delivered its seventh studio album, The Connection. Featuring production from Sixx: A.M. frontman James Michael, as well as Goldfinger's John Feldmann, the album showcased a mix of the styles and sounds the band has touched on over the years from rap to more straight-ahead hard rock. ~ Heather Phares, Rovi