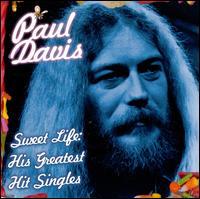 Spotted playing with his country-rock band the Reivers by Illene Berns of Bang Records in 1970, Paul Davis was signed to the label as a solo artist. Born on April 21, 1948, in Meridian, MS, his soft, country-inflected style helped win him several minor hits, including his first single, a cover of the Jarmels' 1961 doo wop hit "A Little Bit of Soap." He released his first LP with Bang in 1972, A Little Bit of Paul Davis. His next album, Ride 'Em Cowboy, produced a signature song of the same name. He followed up that album with Southern Tracks & Fantasies in 1976. Released in 1977, Singer of Songs -- Teller of Tales featured the ballad "I Go Crazy," which would become his biggest hit, peaking at number seven a full eight months after its release. Its continuing appeal helped keep it in the Top 100 for 40 more weeks. In 1981, he moved to Arista Records and recorded the LP Cool Night, which spawned two Top 20 hits, including "65 Love Affair." The album was more slickly produced and pop-influenced than his previous releases. The formula was not a comfortable one for Davis, however, and he reverted to country recordings, eventually issuing two country-pop duets with Marie Osmond in the late '80s. Paul Davis was in the midst of a comeback when he suffered a heart attack in his hometown of Meridian and died on April 22, 2008. ~ Stacia Proefrock, Rovi