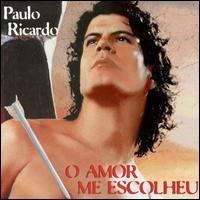 Paulo Ricardo was the leader of RPM, a pop/rock band that was a great commercial success in Brazil. He left the band in 1989 when he recorded his first solo album, Paulo Ricardo. He recorded six more albums by 2000, then switched to romantic music, having had great success in the Latin American market with A Cruz e a Espada, released internationally. At five he performed in Augusto César Vanucci's amateur show and was invited to return several times. At 14, he moved with his family to São Paulo SP and met Luís Schiavon, who would later become RPM's keyboardist. In 1980, Ricardo entered the University of São Paulo in the field of journalism. Soon after, he became a rock critic for the magazines Canja, Música, and Som Três. By the end of the year, Ricardo decided to perform shows with Schiavon, but their pop sound did not meet with the same success as the punk/new wave that was popular in Brazil at the time. Disappointed, he followed his girlfriend Eloá Ramos Chouzal to France and then to London, England. There Ricardo again became fascinated by the prospects of his own band, and wrote songs while corresponding with Schiavon. Returning to Brazil in 1983, when pop/rock was finally becoming financially viable, he recorded a demo with the keyboardist, but it received no interest from any labels. Inviting guitarist Fernando Deluqui and drummer Júnior (who, in January 1985 was replaced with P.A. Pagni), he formed RPM. After the breakup of RPM in 1989, he started from the bottom again, performing with the aid of taped backup music in small, obscure clubs. In that phase, his musical partner and producer Liminha was of great help to Ricardo's comeback. Soon he was invited by Roberto Carlos as a preferred singer to perform in a TV special about Carlos' 50th anniversary. Wanting to re-form RPM, Ricardo played with Pagni and Deluqui in the Rock in Rio II festival. With the addition of Marquinho Costa and Franco Júnior they released Paulo Ricardo e RPM in 1993 (PolyGram). But it didn't work out, and the band was dissolved again in 1995. The following year Ricardo released his solo album Rock Popular Brasileiro, which sold nearly 100,000 copies. ~ Alvaro Neder, Rovi