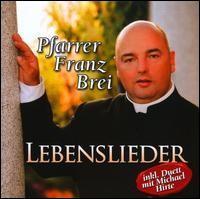 Austrian vocalist Pfarrer Franz Brei is an ordained Roman Catholic priest and popular singer of religious and folk songs. Born in Bludenz, Vorarlberg, Austria in 1968, Brei studied at a theological seminary before entering the priesthood in 2000. In 2009, Brei competed in and won the Austria team trials of the annual Grand Prix of Volksmusik. He ultimately finished in third place. The competition helped boost his profile and in 2009 he released the album Himmlische Klänge (Heavenly Music). While still tending to his religious duties as a priest of the Archdiocese of Vaduz in Styria, Brei records and performs regularly. He has released several more albums including 2010's Glaube, Hoffnung und Liebe (Faith, Hope and Love), 2011's So Feiern Wir Weihnachten (We Celebrate Christmas), and 2012's Was Ich Dir Sagen Will (What I Like to Say to You). ~ Matt Collar, Rovi