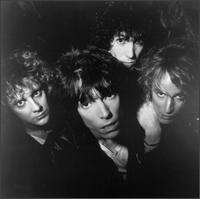 Formed by brothers Chip and Tony Kinman after they split up their hardcore punk band the Dils (who recorded the great L.A. punk single "Class War"), Rank and File were, at times, a dazzling roots rock post-punk band that stumbled early in its career, only to flame out much too quickly and finally collapse with an embarrassing thud. Their debut record, Sundown, was a gem of tuneful, Byrds-ian pop, with a healthy dollop of Gram Parsons and Merle Haggard to boot. The Kinmans' singing was distinctive; they weren't traditional harmony singers à la the Everly Brothers, but rather sang synchronized upper and lower octaves. The songwriting was wry, heartfelt, and cliché-free; the band (which at the time featured the guitar of the immensely talented Alejandro Escovedo) rocked with gusto, but never bombastically, preferring nuance and subtlety over volume and simplicity. In fact, the Kinmans were so into cowpunk and so far from their hardcore punk beginnings that they even landed a spot on PBS's revered country music showcase Austin City Limits. The sophomore record, Long Gone Dead, was an excellent follow-up, but the self-titled third album (it's never a good sign when a band releases a self-titled record three records into a career), recorded three years after Long Gone Dead, was absolutely awful; the songs went nowhere, and the singing and playing, which had previously been so precise and artful, was now buried under a thicket of clichéd hard rockisms. After listening to side one, you knew these guys were done for. Sad, really. In a stunning repudiation of Rank and File's roots rock style, the Kinmans' next project was the execrable Blackbird, an ill-conceived try at synth pop that went a long way toward making them laughingstocks. Former guitarist Alejandro Escovedo formed the excellent (but also short-lived) True Believers with his brother Javier, and since their breakup has recorded a number of interesting solo records. ~ John Dougan, Rovi