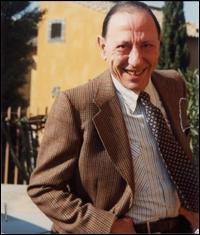 Renato Carosone is regarded as the father of Neapolitan singing, bringing elements of jazz and swing into traditional, Italian songbook. Carsone was born on January 3, 1920, and started his singing career at the age of 17 after studying piano at a conservatory. He was best known for his 1956 hit about postwar Italy, "Tu Vo' Fa l'Americano, which translates to "You Want to Play the American." Other hit songs of Carosone's include "Maruzzella" and "O Sarracino." Though he revolutionized the genre in his home country, he also internationalized Italian song. His songs were featured in the soundtracks of Martin Scorcese's Mean Streets and the 1999 film The Talented Mr. Ripley. Carosone passed away in May of 2001, as a result of complications surrounding a long-term respiratory illness. He passed in his sleep, at his home in Rome, with his family by his side. ~ Diana Potts, Rovi