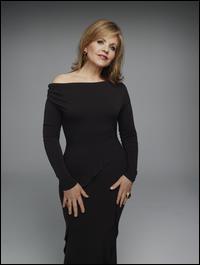 Soprano Renée Fleming was born February 14, 1959 in Indiana, PA and raised in Rochester, NY; while at the State University of New York (SUNY) at Potsdam, she studied voice under Patricia Misslin, and after completing her graduate studies at Rochester's Eastman School of Music she attended the Juilliard School's American Opera Center from 1983 to 1987 under the tutelage of Beverly Johnson. Fleming made her professional debut in 1986 as Konstanze in Mozart's Die Entführung aus dem Serail, and a year later earned top honors at the Eleanor McCollum Competition in Houston; the exposure helped her land the star-making role of the Contessa in a revival of Mozart's Le nozze di Figaro, and in 1989 she made her New York City debut in La Bohème. After making her London bow as Glauce in Cherubini's Médée later that same year, Fleming returned to New York in 1991 to make her Metropolitan debut with a return to Le nozze di Figaro. Just months later she starred in the world premiere of Corigliano's The Ghosts of Versailles. Other roles Fleming created include her 1994 turn as Madam de Tourvel in Susa's The Dangerous Liaisons and her 1998 performance as Blanche DuBois in André Previn's A Streetcar Named Desire. That same year, she made her recording debut with The Beautiful Voice. Star Crossed Lovers, her second for Polygram, followed in 1999. She went on to win a Grammy for "Best Classic Vocal Performance" for The Beautiful Voice. By the new millennium, Fleming was on a roll. A self-titled album appeared in 2000; the glorious opera effort Bel Canto was issued in fall 2002. The release marked Fleming's most ambitious moment yet. Haunted Heart, which featured collaborations with Fred Hersch and Bill Frisell, was released in May 2005. ~ Jason Ankeny, Rovi