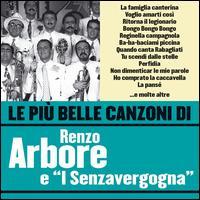 Italian media personality Renzo Arbore was born in Foggia in 1937. After completing his high-school education, Arbore moved to Naples, where he would attain a law degree. In his mid-twenties Arbore began working at a radio station as a programmer, winning the Yellow Flag Award in 1965 for his promise as a young media talent. His program Per Voi Giovani, launched two years later, saw that promise become a reality. The radio program paved the way for Speciale per Voi, Italy's very first television talk show, featuring Arbore as the host. His TV exploits lasted throughout the '60s and into the '70s with the launch of TV quiz show L'Atra Domenica (the first to feature telephone calls to obtain audience opinions), among others. Arbore made his directorial debut in 1980 with the film Il Pap'occhio, playing the lead opposite Roberto Benigni. Arbore made forays into the musical world in 1981 as a vocalist and clarinetist with Telepatria International, which paved the way for his debut album, Ora o Mai Piu, Ovvero Canautore da Grande. The '80s were extremely kind to Arbore, with a number of releases going gold or better. Ma la Notte went on to sell an impressive 800,000 copies, followed by Meglio dal Vivo Che dal Morto, which sold over 500,000. Arbore's popularity continued to climb steadily into the '90s, with his releases gaining greater international notice and his band performing on some of the world's most important stages, including the Montreux Jazz Festival and Carnegie Hall in the early '90s, followed by Madison Square Garden and the Olympia in Paris during the late '90s. Renzo Arbore and his band had become the first name in Italian swing. In 2002 Arbore founded a new band, called Renzo Arbore & His Swing Maniacs, ushered in by the band's debut disc, Tonite! Renzo Swing!, which quickly went platinum. Arbore celebrated his 70th birthday with the release of L'Orchestra Italiana at Carnegie Hall. ~ Evan C. Gutierrez, Rovi